Continuing on with the format I established with the SFF earlier this year, I will be sharing some thoughts I had watching a new roster of Japanese cinema, in the midst of a unusually busy season of films for me (last I checked, I had 11 movie tickets already lined up for November and December).

Regular readers many already be familiar with how my lineups usually look, and while I am always looking for opportunities to inch beyond my tendencies and preferred genres, I believe that this comfort zone of mine is at least diverse enough for surprises, while also satisfying my own tailored love for cinema.

It is a bit amusing to me, for Suzuki to be in the director’s chair for two subsequent, lavish Japanese productions featuring hotels, with the 2017 picture being Honnouji Hotel, a historical fantasy where a modern woman was sent back in time to 16th century Japan, where she unwittingly altered history by antagonising and befriending famous historical figures. For Masquerade Hotel, Suzuki’s eye for scale and style stayed in the 21st century, with a serial murder case happening in the midst of a high class hotel in Tokyo.

The film’s sensibilities no doubt has echoes of modern day Hollywood, albeit filtered through a narrative thesis that is quintessentially central to Japan’s sensibilities for service. The foremost two clues to this catches on within minutes: Naoki Sato’s musical score, and lens flare a la J.J. Abrams.

But let’s start with the film’s set design: as mentioned before, this is a lavish picture oozing with environmental storytelling that threatens to ogle the audience with ambient awe (and no small amount of envy), as the camera lovingly broadcasts the high class sparkle of the titular hotel, with its Victorian-era architectural and furnishing influences, peppered with appropriately modern detailing that straddles the line between luxurious excess and practicality. The film begins by introducing us to the two main players of different games – one in service of others, another in suspecting others – as well as the central battleground where a serial murder was to take place. Sato’s score provides ample sensual context that literally transport the audience into the…unsettling no mans land between reality and fantasy, as a Straussian waltz takes over the majority of the sound stage, carrying with it a sense of high class on the knife-edge of tension and danger. This main theme also forms the central identity, as it plays multiple times throughout the film, even concluding the runtime with a flirty accordion taking on the waltz, as Sato takes viewers a step further into the fantasy realm one more time (accompanying perhaps the film’s best sequence involving an ‘actual’ masquerade).

So clearly, on a production and aesthetics level, the film is a relative triumph of contrasts, stage setting and environmental narrative. What it stumbles on however is what usually haunts novel-to-film adaptations: brevity and coherency of the central story. Sold as a murder mystery, Masquerade Hotel also took upon itself to be a workplace drama that allows us to look deeper into the business of hotels and hoteliers, the cutthroat but hidden conflict between patrons and employees. As a result, several intriguing side stories that ended up being largely inconsequential to the main plotline felt poorly integrated. But as I’ve said before: clearly I see a lot potential in the workplace drama aspect of the story, while also being invested enough to come to a conclusion that saw me disagreeing with the film’s ‘the customer is the boss, makes the rules, and thus they can never be wrong’ thesis (despite the film’s best efforts, this viewer simply can’t agree with giving a customer a free suite upgrade if he himself lit a cigarette and then complained about smoke in a ‘non-smoking’ room. Or even simply yelling at a hotelier like a common thug). In this case, a moral disagreement does not mean my disinterest in seeing more of this world.

In fact, I see much more potential in this title if it was given a web-series format instead (10 episodes of 30-50 minutes each, for instance) that explored the hotel service in more detail, with a murder mystery more casually entangled amongst the mundane dramas of dealing with asshole patrons.

(If anything, the film certainly gave me a lot of think about, as it contextualises several high profile problems perceived in Japanese society surrounding work culture.)

Billed as Yuasa’s…least Yuasa work to date, people are going to take this statement in a number of ways. Ride Your Wave is a 2000s Hollywood ‘ wacked dramedy’ premise, filtered through the director’s head-space.

In yet ANOTHER picture that centres around the profession of firefighters, the film follows a clueless surfer as she moves to a seaside town in hopes of catching literal waves, as well as figure out where her next ‘wave’ in life is, so to speak (yep, it’s as corny as you read it). The twist? She falls in love, and tragedy soon follows.

The drama premise of ‘a widow/widower deals with loss’ is not new, and can be relatively predictable in cycling the main character through the various stages of grief, with more economically-planned narratives choosing to focus on a single stage (rejection of reality, depression, learning to move on, etc). Yuasa tackles multiple stages, with a premise that also works in a touch of light magic, invoking the oldest of Japanese folklore surrounding spirits of the departed needing a ‘catalyst’ and finality before they can travel on.

As a result, the Ride Your Wave is a delicate balancing act that hot-potatoes itself through morbid dark humour, colourful slapstick humour and classic Japanese pervert humour. And it doesn’t succeed every time. When it doesn’t, it feels awful sitting in the cinema. When it does…the echo lingers, resonates, and it is beautiful.

It gets difficult from this point to elaborate further, as we start to arrive at spoilers’ doors. People who are well versed in Yuasa are bound to find a lot to appreciate in the film’s sense of style (although it can also be said the character design and animation personality are less hallucinatory this time around). 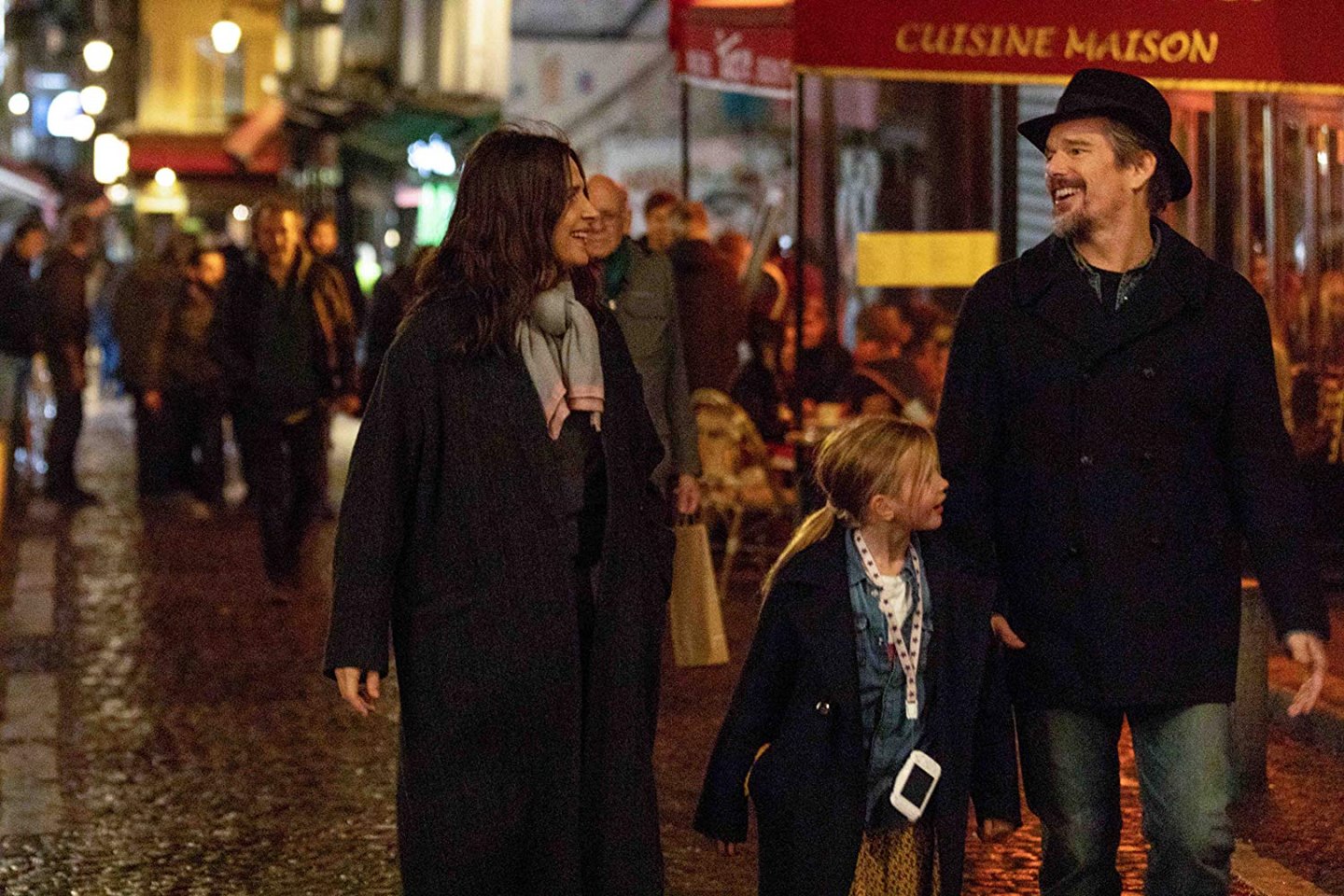 While not officially part of the JFF 2019 roster, Kore-eda visited Sydney for The Truth Australian premiere, while the separate JFF is happening. In deciding to slot this picture in along with the rest, I was in for an experience that I know would be different. The extent was up for debate even after the screening.

To get the biggest curiosities out of the way: The Truth is a French- and English-language family drama directed, wrote and edited by Kore-eda, who doesn’t speak a lick of French nor English (as mentioned by the man himself at the post-screening talk). Kore-eda placed all credit on his interpreter, who not only enabled him to converse with the French/American cast, but also made sure his Japanese script made it across the linguistic barriers emotionally intact. As a result…The Truth is undoubtedly a Kore-eda family drama, steeped in an eye for mundane theatricality that has defined his Japanese filmography. Perhaps what makes this film stand out isn’t just the setting and cast…but how the Kore-eda ethos filters through a story that is very much within his wheelhouse, but somehow manages to drum a more assertively diverse beat.

French cinema royalty Catherine Deneuve‘s Fabienne is fabulously narcissistic from minute one, as she ‘discusses’ her newly published ‘autobiography’ with a journalist, dismissively waving off questions that she remembers answering in other interviews, refuses to cite her influences from previous generations of actors, and always seems to assume her competition are either not on her level, or are dead (usually a wrong assumption). Not to mention this ‘autobiography’ of hers, as pointed out by her visiting daughter, is lined with complete fiction, either whitewashing parental neglect, or straight up inventing scenarios of intimacy. “I’m an actress, I won’t tell the unvarnished truth, It’s far from interesting.”

This…odd hot-cold tension of irony always seemed to be lined with the usual ambience of empathy and even warmth, despite how arguably despicable Fabienne gets in the picture. Kore-eda refuses to sand away her character’s dimensions, nor let her daughter Lumir go easy.

The Truth is lined with small micro-narratives that tiptoe underneath the sometimes meandering main narrative, as it follows the family through a fictional film production with Fabienne, which fascinatingly takes direct influence from Chinese science fiction writer Cixin Liu. Fabienne’s ex-husband would turn up unannounced, and exposes her few moments of whimsy and humour to her visiting granddaughter Charlotte, who herself has a lively and authentic presence in the film’s world. This showcases some of Kore-eda’s biggest strengths as a slice of life director, who can establish a very strong and trusting working relationship with child actors, and allow characters in his films the space to authentically exist outside whatever main narrative he is telling.

It is often a wonderful experiment, to observe how a director whose works and their resonance with audiences is so explicitly tied to a specific geographical or culture setting, transplants the way he views, captures and moves through film to another setting. The Truth is obviously a Kore-eda film because it practically showers you with Koreeda-isms: the changing seasons through landscapes, a sense of warmth and empathy that is wordless and unexplainable, a lingering camera that captures unfiltered life as a young daughter clumsily crams herself onto bed between her parents. It is certainly not the director pushing himself in radical new directions, but this is definitely a migration of one’s art; a painter setting up his easel at a landscape he has never painted before.

I mean, for all intents and purposes…what should I really expect, walking into a film with this title?

Brave Father Online is a re-adaptation of the Dad of Light TV series, itself based around the same real-life inspired story of a father bonding with his son through Final Fantasy. Anyone familiar with how East Asian brands tend to ramp up their domestic advertising with sappy feel-good (or guilt-trip depressing) stories won’t be surprised with this film at all.

The film divides itself between live-action scenes and in-game engine screen captures, with Square Enix offering the filmmakers a deserted server, so the game avatars and their ‘character’ controllers can re-enact scenes in a controlled environment. The stiff idle animations, contrasted with the hyper-exaggerated ’emoting’ that players of FFXIV would be familiar with, makes the in-game scenes the most entertaining by far.

While slapstick and goofball comedy is aplenty, the film’s thesis still relies on the sentimental and nostalgic connection characters have with a brand (cue marketing buzzwords), plus a meta-narrative wink just to hammer the message in further, since the son in the film also works at an advertising agency.