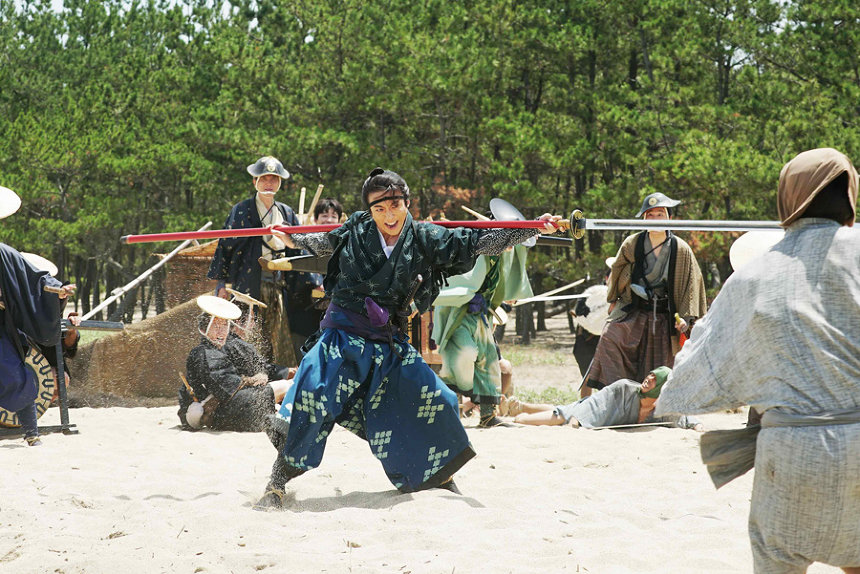 How do I even classify this film? It’s a period drama, romantic comedy, kinda political thriller and even a pinch of musical. This all-in genre meshing works very much both in favour and to the detriment of Samurai Shifters.

As a novel adaptation, the film as usual suffers the exposition dump disease, with scenario and historical context being provided to the audience as a prologue and continued narrator voice-overs. Except for this international viewer who has next to no roots to domestic Japanese history…this wasn’t really helpful.

Worse still, since the main character is a chronic bookworm who took upon himself to collect, store (and later memorise through a days-long hermit shut-in phase, due to a plot development…don’t ask how or why) thousands of books; an activity that his less literature-inclined clansmen and fellow samurai don’t really appreciate, as well as this viewer. Not because I myself don’t see cultural value in preserving words, but because when he starts crying over having to burn specific favourites (ahem…AFTER he has memorised them word for word, obviously), I couldn’t empathise with or appreciate why he holds those specifics books in high regards.

At least the ‘hook’ of the film was simple enough to grasp: a samurai clan was ordered to move their entire town hundreds of miles to another province. A massive logistical nightmare awaits whoever is given the job to oversee this grand odyssey, under the pain of seppuku should he fail.

Shunnosuke the librarian samurai is a clear-cut stereotypical timid, shy, almost kawai feminine main character, who has to learn how to ‘man up’ as he was put through trial after trial of dealing with lords trying to haul unreasonable loads for the trip, saboteuring agents, homosexual affairs, and ‘retiring’ samurai to farm work, since their budget post-move simply cannot hold onto them as warriors on payroll.

Not all is doom and gloom however, as the film pairs Shunnosuke with other, more fun stereotypes: overconfident playboy and best bud Genemon and spunky love interest Oran. The loyality of Genemon to his timid childhood friend was a heartwarming affair that delivers both soft smiles and laughter, while Oran’s ingenuity and growing affection between herself and Shunnosuke is wonderfully presented by excellent on-screen chemistry.

Add to that, hiking songs, weirdly sexual innuendo-heavy samurai training routines and a climactic action scene, Samurai Shifters is indeed very watchable, a pleasant dinner party affair. However, the film’s (sometimes needlessly meandering) focus on the pre-move logistics may have unfortunately robbed us of a potentially much better road trip antics film, giving it opportunity to explore more locations and geographically-centric scenarios (we never did find out how they navigated bodies of water) and reward the audience with more scenery porn, as well as the fruits of Shunnosuke’s labour. A shame, that the 400-kilometre journey was never explicitly shown to the audience.

Dance with Me | Shinobu Yaguchi

Ah, the headliner feature for this festival.

Needless to say, out of my expansive roster, I was most looking forward to checking out this film based on the trailer alone: extravagant dance sequences, great music, and a truly bizarre plot device that may well send our main heroine down a very embarrassing (but fun) adventure.

Did it deliver? Ehhhh…

Let’s start with the director first. This certainly wasn’t my first official encounter with Shinobu Yaguchi‘s name (although this IS the first film of his I ever watched to completion). That honour went to me finding clips of 2004’s Swing Girls on YouTube. The story behind the entire Swing Girls’ main cast spending months learning to play instruments and Jazz, in order to perform completely organic concert sequences in the film, was enough for me to place faith in Dance With Me’s ability to give us dazzling musical and dance sequences, beyond the little that was shown in the trailer. That it did in spades.

The film as a whole however, is a rather clumsy affair as it attempts to critique the corporate work culture of Japan, contrast it with an equally aloof ‘antithesis’, before finally arriving at a conclusion that somewhat promotes the very by the books conclusion to ‘find your own passion’. How it goes about this journey is also rather clumsy, as the buddy road trip premise allowed our main pair to encounter very bizarre situations and even more bizarre people (murderous ex-girlfriend basking her way to her ex’s wedding so she can sing at reception to make him jealous, before trying to murder both him and his fiance, anyone?) This story construction means a lot of very entertaining sub-sequences, weakly strung together in a sort-of- main story that fail to stick.

But hey, no one can fault this film for playing its hand to the fullest: Dance With Me is a rare modern Japanese musical that follows the Broadway visual language, and leaving JUST a bit more ‘social consequence’ reality attached for the laughs. Because as Kore-eda quite aptly noted after his The Truth screening: No Japanese person in their right mind would dance unprompted in public or in a perilous (i.e. important business) situation.

Perhaps in hoping to conclude my time in the Japanese Film Festival with a wild card; a film that I might never ever encounter in another instance, I decided to go with an indie debut drama feature, one that I might not ever have another opportunity to see once its out of the film fest and cinema circuits. And this one deals with an uniquely complicated societal feature of East Asia: the Rent-a- industry.

In urban hubs of Japan, a thriving industry exists where people rent themselves out to lonely patrons seeking human companionship. These rented ‘relationships’ can be as varied as friends, husbands, girlfriends, even fathers and daughters. Neither the film nor I wishes to debate the moral implications of such an industry, at least not here. Fact of the matter is: the urban human conditions of Japan of today is one that maintains the existence and dare I say even necessity of the rent-a industry.

Instead, Rent a Friend’s humble 70 minute runtime attempted to explore the undercurrent relational politics between the renter and the rentee.

A writer for a tabloid news website decides to rent a friend on a regular basis, so she can utilize the experience to explore the boundaries and limits of this ‘fake’ relationship, as well as coming up with articles for her job. Inevitably, the topics of love and genuine emotional connection starts to crop up, not only between herself and her rented friend, but her musician roommate.

If anything, watching this film has honed me into what I’m confident to be the ‘indie look’ for domestic cinema in the region: I’ve noticed in quite a number of pictures over the years that low-key, domestic dramas tend to retain a…smokey and foggy lens, as supposed to the high-contrast, slick look that blockbusters like Masquerade Hotel prefers. Rent a Friend takes this look to its zenith, as well as cramming the camera into tiny apartment spaces, as if quietly violating the privacy of these confused characters (suitably accompanying the meta-narrative of a tabloid writer being pressured by her boss to write about this decidedly private affairs).

In the end, what started as an intriguing angle on a intrigue topic, felt like a series of photo essays without a distinct thesis. I am glad I caught this movie, but at the same time…I doubt the film succeeded in any significant area of resonance.