I’m actually not sure how I should tell this story for you. Is this just a collection of conventional thoughts on films, or am I supposed to frame this more as another one of my Tale Time entries? (Haven’t done one those in a while huh…)

Going to the cinema and watching a film works in conjunction when it comes to me recalling experiences for a blog post. Experiences never exist in voids, they meld and influence each other. Perhaps this is why I find it so difficult to write straight up film or TV series reviews, whether I watched it alone at home, or with a group of people. It wouldn’t be a stretch to say that half the fun of watching a Summer blockbuster copy-and-paste explosion fest is the environment of a filled-out cinema, with some 400 people reacting to the same things you are.

Alright. Context. So for the months of August and September 2017, our anime gods of down under, Madman Entertainment, decided to run a ‘Celebrate Studio Ghibli‘ screening run, essentially catapulting the entire studio filmography of some 22 titles onto several cinema chains in the Australia/New Zealand region. It was a golden age for us film junkies, who still haven’t forgotten the Experience (with a capital E) that is the cinema atmosphere.

I managed to catch a total of five films, as well as two anime shorts that were included with the Premiere screening. Of the five films: My Neighbour Totoro and Whisper of the Heart earned the honour of being repeated viewings for me, as they were near the top of my favourite Ghibli entries. Princess Mononoke, Ponyo and Spirited Away were also finally scratched off my watch list, and I couldn’t be more glad to have these first viewing experiences on the big screen.

As for the anime shorts, On Your Mark was a music video directed by Hayao Miyazaki, intended for the rock duo Chage & Aska, and Ghiblies Episode 2 bundled two tales that retold some past experiences from the Ghibli employees themselves.

What follows is going to be a compilation of thoughts on My Neighbour Totoro, so I guess you could call this a glimpse into how I generally regard the studio’s filmography. Slotted in will be a series of short recounts of my experiences, classic Nachi story-time style. Let us begin. (As for my thoughts on the other films in the list…guess those will have to wait for another blog post.)

A ticket to attend this one-time-only screening at Sydney’s George Street Event Cinemas was an inflated $50. A typical standard screening usually stood around $18.

Now, the supposed reasoning behind the event’s…eventual full house may sound either daft or justifiable, depending on how you feel about sentiment. It IS a premiere, a show opener, and instead of just one film, it bundled another two anime shorts as well. Plus, there’s that event-exclusive Shaun Tan-designed poster, available only to ticket-holders. (For those not aware of Tan…it wouldn’t hurt to either Google or check out his animation shorts and picture books in your local libraries. Some evocative stuff.)

But yeah, despite the steep price tag, the place was filled with people of all origins and times: I was sitting near to a group of elderlies, evidently close friends for years, a few uni/high school-age kids, and I can distinctly make out the fuss made by clusters of young families with children further back. And when you consider that the premiere screening’s main feature was Totoro of all things, I think it would be worth our time to contemplate the sheer level of resonance that a film; which would’ve been classically dismissed as directionless and boring, was able to gather over the decades.

A Stubborn Product of Joy

Hayao Miyazaki wanted My Neighbour Totoro to be a trigger of extroverted joy: an experience that will encourage recalling of childhood backyard adventures, a warm blanket that will endear couples to cuddle by the end. It is with this goal in mind, that the famous director made the distinction between a product of sentiment, and of joy.

“Even in this global age, it’s the most local things that can have a worldwide effect.”

To Miyazaki, sentimentality is surrendering to progress. It is the memory of the joyous, corrupted by the acceptance that the source of joy has long since vanished. The Japanese countryside, and the simple lives of contentment people made upon the farmlands is part of the country’s identity that the director stubbornly refused to give up on. In simply referring to the product as ‘a film that’s set in Japan’, Miyazaki has positioned the locality of the film’s setting as its greatest asset.

But I don’t think it’s that simple. At least when it comes to how I’ve come to understand the film’s enduring ethos.

On one hand, it may seem redundant to start lapping praise upon the film’s portrayal of children, so I decided to summarise my take on this by talking a little about in-world characterisation. 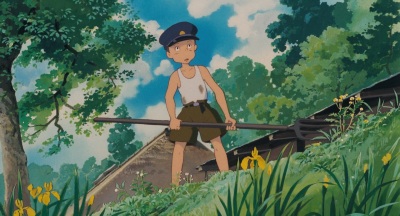 So what do I mean by in-world characterisation? If I were to focus on the human characters specifically, I would be talking about the ambient signals that tell us about who they are as individuals. By lingering on the in-world character animation and their designs, the film allows the audience to subconsciously unpack their organic personalities, all within the first two minutes of runtime. Consider the father’s shirt and vest fashioning and his glasses, the sisters’ leader-follower dynamic or Kanta’s stained undershirt and officer’s cap, for instance.

Historical curiosity is key here: through animation, we can easily establish the bubbly personalities of the sisters and their sibling dynamic, and through fashion, we start to map out the father’s possible occupations, while also starting to develop a curiosity about Kanta’s cap, since that’s a relative outlier to the typical farm boy get-up: does Kanta have a relative who died in military duty? Is that a policeman cap? Does he have an officer in his family? (Later we find out it’s actually his school cap.)

Character design is not just about maintaining character consistency or strict authenticity. Any choice made in their designs is a story or potential for one in of itself. Lingering character animation; such as Kanta’s blush at the sight of girls and him self-consciously return to raking up straws, are obvious window dressing that serves to enhance the in-world character.

Of course, ‘in-world characterisation’ also applies to cinematic worldbuilding and landscape design, which is another one of the film’s most striking merits.

Miyazaki has a personal reverence towards nature. And this belief in the spiritual properties of natural places unstained by man flows seamlessly across the man’s entire filmography. Totoro as a film, doesn’t contain a plotline that specifically explores this man-nature relationship (I would even argue that it doesn’t have an overarching or guiding plot, nor did it need one), but its obsessive paintings of setting and character detailing highlights a particularly humble respect for the unseen deities that grant life to the land. The film constantly backgrounds its human characters, opting to overwhelming their presence in the frame with panoramic vistas of beautiful and evocative forest imagery and flora-infested horizons.

The film lingers on its various locations with such meticulous delicacy, even the geography of the family house is established down to the inch, despite never featuring most of the various locations again after the first ten minutes. This point is important, because Totoro spends most of its runtime outdoors. The family house’s maze of sliding doors, interconnected rooms, bathroom and the attic were mainly utilised as a catalyst of characterisation for the girls and their father. This is of course a very polished utilisation of the setting, as characterisation via. the depiction of how character interact with the space they are in is always a reliable choice for such a goal.

My Neighbour Totoro is as directionless as a walk on a beach alone, observing the life and drama around you as your bare feet stung against the calming chill of the water, foam and sand. There is no destination in mind for you, as your eyes followed the coastline that seemed to stretch on endlessly. Modern life has taught us this is a waste of time. A goalless hour is a hour wasted, we were told. My Neighbour Totoro is a defiant antithesis of that mindset.

Epilogue | Regarding the Hoarder…

Let’s finish the story I started with a bang.

Remembering that event-exclusive poster we can grab for going to the premiere? And that it’s supposed to be one poster for each ticket-holder? I grabbed three. And no, I didn’t need to wrestle with two other fans to snap up their share.

I will testify, that I told the cashier who were handing out the posters that I had two friends who purchased tickets, but were unable to attend at the last minute, so I was wondering if I can grab two posters for them at least. a minute later, I was strolling to the train station with a three-poster bundle under my arm, desperately trying to maintain a poker face, because this combined feeling of smug triumph and tampered guilt would certainly make my facial expression even more suspicious. So there. End of story. (Oh calm down. I am sure they printed more posters than they needed to.)

Oh. I guess I do owe readers an explanation for this non-nonsensical post format. The short answer: this post really is a cluster of goals of both wanting to talk a little about the film and my experience watching it.

The long answer: This post was technically six months late. I originally planned to publish this post right after the August premiere, but circumstances arose and prevented me from continuing to writing this until March has rolled around. In the end, I decided to combine two posts into one haphazard jig-saw puzzle that included my main ideas about My Neighbour Totoro, as well as my little story about the three Shaun Tan Ghibli posters I now kept tubed up and tugged away in a closet somewhere (I plan to frame one for hanging once I have a scope about my moving situation).

And this brings us to the end of another Tale Time entry. Sadly enough…as one of my favourite segments to write, Tale Time is not popular with the stats. Which is understandable of course, since I don’t lead some Casey Neistat-like life or anything. Oh well.

(Can anyone tell me how long it takes before the statute of limitations comes into play around here?)

One thought on “Ghibli in the Cinemas: Totoro Premiere & The Story of the Hoarder”