As September 2018 draws to a close, the TV anime Shojo Kageki Revue Starlight has, for the moment, come to an end. Now that everything has come to light, we are able to deliver the second half of the roundtable discussion between the music producers, Teppei Nojima (Pony Canyon) and Kohei Yamada (UPDREAM), and the lyricist, Kanata Nakamura. In it we look back on the revue songs that have accompanied the dramatic developments of the second half of the series, and ask about their overall thoughts as they strove to produce a ‘musical x anime mixed media’ project – something that has never been done before.

Nojima: I was the one who suggested that we get Keita Miyoshi to compose ‘RE:CREATE’. Miyoshi composed a song called ‘Smilium’ for (Suzuko) Mimori’s solo work – and it’s incredibly moving, you see. What we wanted was a song that included dramatic shifts in emotion, so I nominated Miyoshi, as his songs tend to be easy to project feelings onto. And we ended up getting something completely Miyoshi-esque.

Yamada: The song is amazing! It sounds like a pop song – even in its construction – but it’s actually a storm of irregular time signatures. It’s incredible how he managed to make it sound like a pop song.

Nojima: The technique is amazing, isn’t it? It starts in 7/8 time then…ah, that’s right, we talked about this during the voice over recording session, but there’s a bit of a coincidence in the time signature: 7/8 is a play on ‘Nana (7) of episode 8.’

Yamada: When we looked at the sheet music, we went “Oh!”

Nojima: Mimori’s singing is also very powerful, so we wanted to bring out the best in her. Her singing is very expressive, you see.

Nakamura: I even got goosebumps during the voice over session. 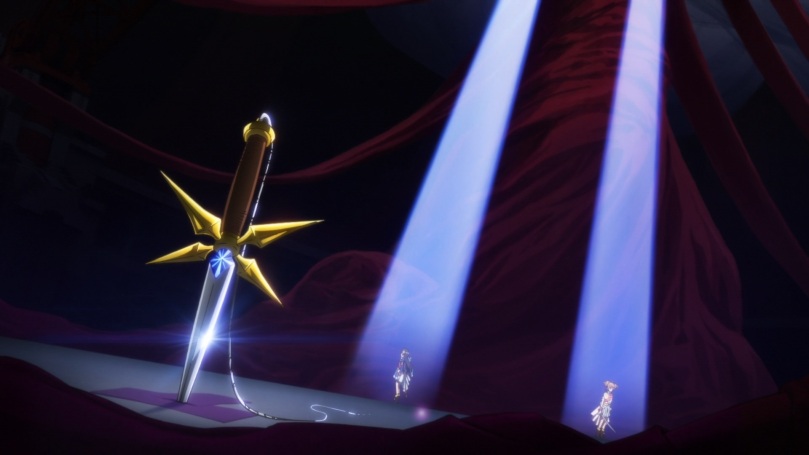 Nojima: She really is amazing. After recording, I would play it back to check, and (Moeka) Koizumi, who was with me in the studio, ended up crying each time (laughs). She would say “It’s such a good song…” and cry whenever Mimori sung, so we were all like, “Banana’s such a nice girl” (laughs). Story-wise, the shocking revelation happens in episode 7, and the story moves in a large way in episode 8, right? So we wanted to focus on how we could make the song persuasive and powerful. We would end up losing to the animation if the music wasn’t just as impressive, you see. We also had Fumiaki Kota, who works on the Symphogear series, in charge of the storyboards and episode direction. How he depicted the girls singing while fighting was just incredible, and I’m happy it all fit together so well.

Nakamura: As for the lyrics, after the music box comes in, Hikari is ‘reborn’. From here I wanted to have Hikari open up with her true feelings. If you recall, during the fight with Junna (Hoshimi) in episode 1, Hikari never really expressed her emotions in the lyrics. This was also the case for the first half of this revue. But when she sings “The dream for the both of us will bloom” and the flower on her weapon blooms, I had to make sure the lyrics were fitting for this event.

Nojima: Director Furukawa gave me instructions/orders like “I want the music to explode here” and “Make it overflow”, and I had this carried over to the lyrics as well.

Nakamura: My starting point was “The dream for the both of us will bloom” – I then went on to write the lyrics for the first and second half of the song. And Hikari’s feelings in the second half. “I won’t lose anymore. I won’t give up” – Mimori’s singing during this part was just so incredible. I thought, “We won! We’re the champions!” (laughs).

Nojima: It’s here that Hikari is finally able to express her feelings, not through lines of dialogue, but in a song. Mimori’s singing would power up each time we took a recording, and Koizumi would always end up crying (laughs). 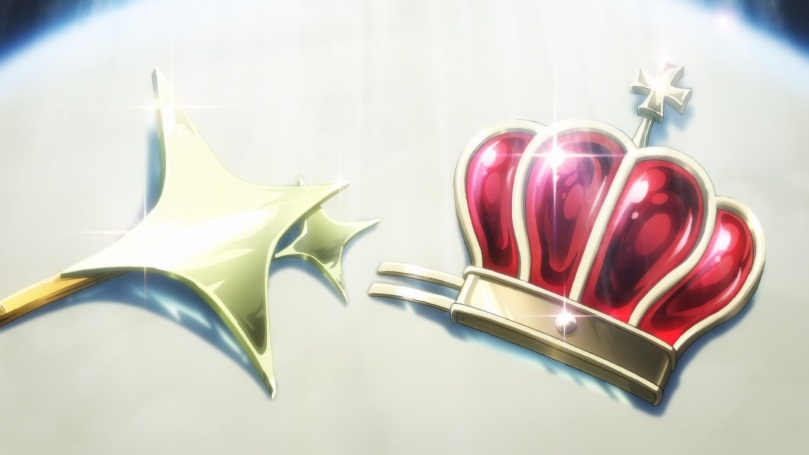 But then we move on to episode 9.

Nojima: Banana worked really hard for this one. For the backing vocals, Koizumi said “I’ll do it!”, so they’re all actually sung by Banana.

Yamada: For the revue songs, we generally don’t add backing vocals or harmonies. This was also to make sure that the main melody stood out.

Nojima: We thought it would be strange if you could hear your own voice as a harmony while fighting [in the revue].

Yamada: But although we kind of put that restriction on ourselves, this song was a special case. This time we thought that it might be interesting if we could pull it off. On the day, we had Koizumi learn it on the spot and we then went ahead with the recording.

Nojima: We put so much emotion into episode 8 that, at first, I was struggling with how we would follow that up in episode 9. I asked the director and he mentioned the horror film, Suspiria, so I was like “What’s he on about?” (laughs). Then, I realised that since Nana’s story is that she’s trapped in a time-loop, maybe he wanted to express the sense of dread associated with that. The director also wanted there to be the sense that there was a layered choir in the back. I then thought that it might be more interesting if Nana sung everything.

Nojima: The amazing thing about Fujisawa is that he’ll quickly digest anything you tell him and figure out what you need. I don’t think the revues would have come together if not for Fujisawa.

Yamada: The songs in the most important episodes were all done by Fujisawa.

Nojima: During episode 9, Nana sort of gets purified, or well, Karen provides her with hope and she’s then able to break away from the loop. So the moment that Karen steps forward, the tone of the song becomes softer. I thought this shift was brilliant. 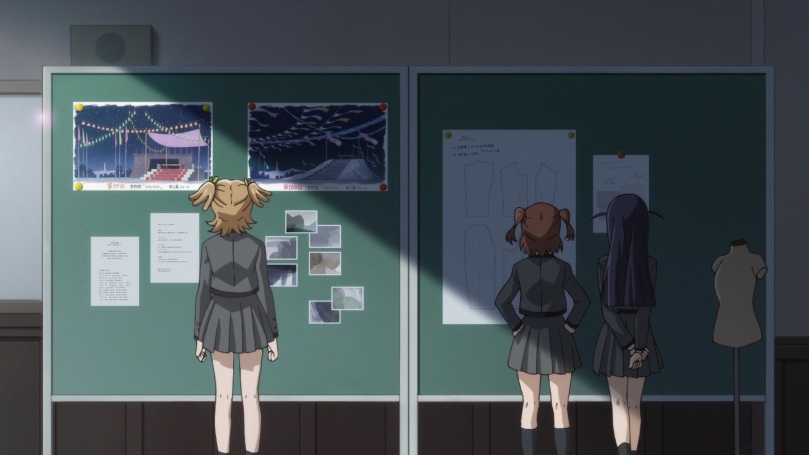 Nakamura: For the lyrics, the focus was on Karen convincing Nana. I express Nana’s obstinance in the first half, and it’s not very lyrical – more like she’s just reciting the words. Nana’s first three lines are like something from the demon lord, and then Karen pulls her back with softer, more human words. I needed some strong words in the opening to get across a sense of unease, so the words I used here were more direct. I also used the same phrase, “Bonds of the stars,” at the end of the revues in episodes 8 and 9, as to link the two together.

Nojima: As Miyoshi and Fujisawa are part of the same music agency, they were able to collaborate, like on the melody and the sound of their songs.

Yamada: The composers generally all knew each other, so we did our best to make sure that they all were on the same page. The BGM was also in complete harmony with the revue songs, so we wanted the transition…no, we needed the transition to be seamless between the two.

Nojima: Fujisawa and (Tatsuya) Kato both worked on the BGM, but they weren’t working together. Rather, each of them put out their pieces individually. And, as if they were fighting each other in a revue, they inspired each other. The insert song composed by Kato, ‘Hoshitsumi no Uta’, was only 4 mins 10 seconds long, but it needed to cover a scene that lasted 4 minutes 40 seconds (laughs). He quickly composed the rest for us.

(The interview continues in the next page. You can find the page numbers below the ‘related articles’ section.)