In this latest series of interview translations, ATMA & Funomena will be presenting comments and observations of three prominent voices from the production of Violet Evergarden, continuing with series director Haruka Fujita.

These translations are offered to fans of the series as material supplements for the upcoming making-of documentary-style video by the YouTube channel Under the Scope.

The original interviews were conducted and published in the Violet Evergarden Official Fanbook.

Other interview translations in the series:

Firstly, at what stage did you become involved in the project?

Fujita: I officially became involved with the series at the start of development, when the main staff were decided. However, I did already have an interest in the project as I had previously heard about it from the director, Ishidate. Since I’d only just been promoted to episode  director at that time, I didn’t really have any confidence in myself, but still, I really wanted to be a part of this production.

Had you already read the novel at the time?

Fujita: Yes. I read it around the time it was submitted for the Kyoto Animation Awards. After reading the novel, I felt that it was forgiving, or perhaps affirming of your way of living. It’s the sort of novel that might give you good dreams if you read it before going to bed. The writer, Kana Akatsuki, had written something along the lines of “I believe in you” in the afterword, but this novel really did feel like it was cheering you on.

Although the protagonist, Violet, felt somewhat otherworldly, for some reason I had the feeling that, if it was her I could open up in a conversation. Even with something trivial, if it was her I think I would look forward to just how she might respond. It was with this strange sense of charm that I was drawn to Violet.

How did you feel when it was decided that you would be series director?

Fujita: As I mentioned before, I wanted to be heavily involved in this project and further my understanding of the novel. So whilst there was some pressure, I was still very happy. On a personal front, reading the novel left me feeling that I’d been saved, and as such, I wanted to make the series into something that could share this same feeling with those who watched it.

But in reality, I was constantly encountering difficulties throughout production. There really weren’t any times where I was able to say ‘That’s it!!’ with a flash of inspiration; it was basically a process of (Taichi) Ishidate and I getting hung up together over various things as we went along. It was especially difficult to establish the fluctuations in Violet’s growth within the series. Having to explain things like the extent of Violet’s growth, or the subtle changes in Violet’s emotions to the staff for each and every episode wasn’t easy. Her facial expression could change just through the nuances of her mannerisms or eyebrows, and so as series director, I had to work through trial and error. It was easier after episode 9, where Violet sorted out her feelings and found a reason to live other than for Gilbert. But until then it was a struggle.

As for things I enjoyed, I really liked drawing Violet when she was expressionless. It gave me the opportunity to once again think about that feeling where you’ve received words from someone, but you don’t yet understand what they mean. I liked to think about just what emotions might be packed into Violet’s expression. 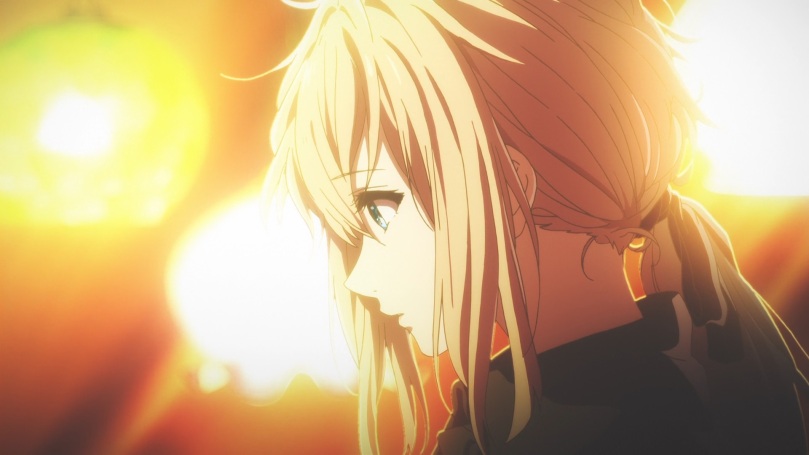 The feelings within Hodgins’ tears

Did you look at the series in a different way, or have any different ideas to that of Ishidate?

Fujita: I think the director looked at Violet from the perspective of a parent. He wanted to raise and nurture Violet, who was, at the start, like a blank slate. If I had to choose, rather than Violet, I’d say that I felt more drawn to the characters that changed through their meeting with Violet.

As for ideas that came from me, when correcting the storyboards for the last scene of episode 9, I changed the expression on Hodgins’ face. He was originally smiling, but I changed it so that he would be crying. The reason that Hodgins stayed quiet about how Gilbert had not returned wasn’t because he felt awkward talking about it, but rather, I’m sure he stayed quiet for the sake of Violet. Putting myself into Hodgins’ shoes, I thought that after hearing Violet ask ‘Am I allowed to carry on living?’, he surely wouldn’t be able to keep himself from crying. As the change remained after Ishidate checked those storyboards, I figure that this interpretation was probably correct.

Other than your work overall as series director, you also directed and story-boarded episode 2. Why did you decide to show Bridget’s injured finger?

Fujita: At first glance, Bridget seems aloof and haughty. However, through this single shot of her hand, you get a glimpse into her everyday life. I wanted to show that in some way or another, she too was living earnestly despite the challenges she faced in her own life.

This episode was about Violet learning that people don’t always say what they truly feel. Showing that there’s a face that Bridget presents to the world whilst she hides something else inside was an easy-to-understand way of expressing this. Speaking of episode 2, Erica was the main character for the episode; personally, I quite liked Erica’s slightly cynical personality (laughs). That scene where Erica hears from Violet why she wants to become an Auto Memories Doll and she replies by saying ‘That’s it?’ – Minori Chihara’s acting there was brilliant! 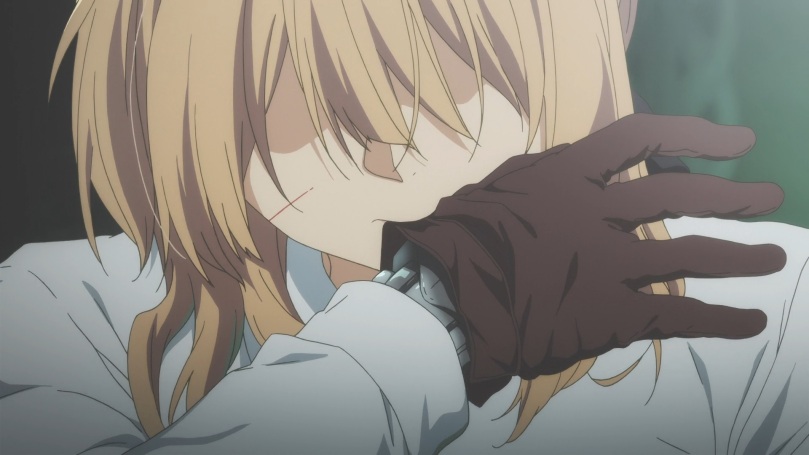 Watching over Violet as a part of her world

You storyboarded, directed and even key animated the ending yourself. Please tell me about it, from the selection of the song to what we saw on the screen.

Fujita: As series director, I was involved from the start, when we put together the order for the song. My idea from the anime’s music and visuals was to have something like a simple folk song. Since it was going to be broadcast in the late-night slot, I thought it would be nice if the song was something that could give you a good night’s sleep after watching the show, sort of like a sleeping pill. (Character designer Akiko) Takase also suggested ‘How about a song Violet might sing to herself whilst walking somewhere?’ and I remember passing this idea on to the music producer.

The lyrics were written by the singer, Minori Chihara. Her first draft for the lyrics perfectly fit what I had in mind, so it was mostly unchanged. I thought that the first line “Your voice is my guide” was really nice as you could interpret it in different ways depending on which character’s perspective you chose. For example, in episode 5 this could be Alberta’s feelings towards Charlotte, or it could also be Charlotte’s feelings towards Violet. In this way, the song became something really lovely, capable of expressing anyone’s feelings towards someone dear. As I wanted something simple for the song, I had the composer gradually trim elements from the piece that he originally brought to us.

When thinking about how something might look visually, I would think of myself watching over Violet as if I were a part of her world, floating around like dust. When I mentioned this, the music producer said ‘So basically, you’re God?’ (laughs). I got all fired up and made the ending storyboards in colour so that my intentions would be clear to the key animators, but in the end I ended up key animating it all myself. Whilst working I would look at the storyboards and think to myself “Ah, yes. I see (so that’s what the ED sequence director wanted to do)” (laughs).

Finally, please tell me how you feel now that production is over?

Fujita: Honestly speaking, it doesn’t feel over at all. Although we got hung up over many things throughout production, reaching the point where Violet is finally able to say, ‘I even understand, a little, the words “I love you”’, I feel that her growth has been truly extraordinary. ‘I understand, a little’ is difficult to say, right? I feel that she was only able to say these words precisely because she faced difficult and painful situations head-on, and so one day I want to be able to say these same words as well.

The funding of this interview translation was a collaborative effort between me and seven prominent anime content creators.

Commissioned by: Under the Scope

I aim to organise more collaborations and solo commissions like this in the future, and all the fruits bore from these efforts will never be locked behind paywalls. However, that does mean I will need help. Passion projects with no intentions of profit doesn’t mean producing them is free of charge.

Please consider supporting me on Patreon, so I can continue pushing this blog into more grander heights.