(This entry is part of the Anime Secret Santa Project)

Kamichu is an ample demonstration of what can go wrong with a production of the slice of life variant, when no clear sense of pre-meditated direction is given.

Contrary to the often-cited personality of shows that forego an overarching plot for atmosphere and character, anime that dwells on the sensitivity of the mundane beauty of its world, still needs to make an effort on adding texture to the respective outlines of the fictional space that they will present to the audience.

I think I started to suspect that Kamichu might have a SLIGHT issue with coherency at episode 4. After learning of the nature of the relationship normal folks have with the deities and the supernatural, and introducing an unrequited love subplot featuring the main character Yurie, government conspiracies and abducted Martians gets thrown into the mix with a far less subtle progression than I would’ve liked.

Never mind that each episode is like a short story, with neither the runtime nor personality to fully demonstrate their potential, even if some specific instances of resonance can be picked out. Kamichu was at least able to demonstrate the height of its potential with stories that involve nostalgic trips to the past with a rundown beach house, as well as a totally hammy and cheesy tale about the legendary battleship, Yamato.

Kamichu may be an example of its mega-genre that would somewhat legitimise the popular criticisms levelled against it: the lack of an overarching plot leads to incoherency and lack of direction, for instance. However false such a blanket statement may be, Kamichu is undoubtedly flawed in all the major pressure points that prevents it from being an enjoyable experience, even for the most die-hard advocates for the slice of life genre (i.e. me.)

A more functional treatment of the same basic concept, in regards to a regular school girl becoming a deity. 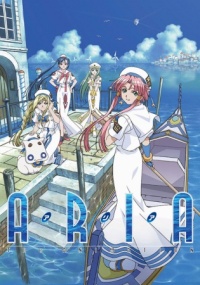 Further reading: please check out my piece on the first season of Aria, where I reflect on the eternal optimism of its main character, and the self-coined concept ‘mythification of normality’.