Like it or not, trailers are an art form. And like any art form, the contested validity of their societal worth is often the only framework of discussion that floats among the mainstream. Contemporary culture’s love for ‘what comes next’, makes for a very horrible environment for any sort of expressive ‘fad’ to gain recognition, especially when such a culture is sandwiched with the famed slots of the ‘timeless few’, which have already been filled with the likes of Star Wars, Sherlock Holmes, Harry Potter and Tolkien.

Personally, I’m not sure how long trailers have been a thing. I guess in this instance, what I mean by a trailer would be 30 seconds-3 minutes of footage dedicated to selling the narrative or ‘worth’ of a film, video game, novel or album (are…trailers for albums a thing?). So as a subset of the umbrella term ‘advertisement’, trailers for entertainment operate in a very contested field, where attention and RETAINING said attention of an increasingly distracted public is key.

Which brings me to today’s topic:

It might surprise you just how much is going on here. And no, the visual fidelity isn’t the only hero here. For newcomers to the Ori franchise, this trailer may ‘just’ be a introduction to a potentially great platform game, one that has a lot of stunning cutscenes, gorgeous background, creature and sound design. But those who are already even somewhat acquainted with the prequel, Ori and the Blind Forest, would be all too aware of just how…affecting the trailer was.

Guiding Affect: Brief Background on the Composer For Ori

Game composer Gareth Coker has commented rather extensively about the interconnection of melody and world, when he was interviewed about his approach to scoring Ori and the Blind Forest. At the risk of reading too much into minute details: the E3 announcement of the Ori sequel featuring Coker himself on stage with a lone piano, seems to be a pretty indicative statement on the entangled status of the game’s background music and the lingering appreciation of the game’s artistry.

Nevertheless, Coker’s creative and professional background, and the medium he works in speaks very profoundly on the still maturing appreciation of film and games music within the general public, avid gamers among them. Having had his musical education at the Royal Academy of Music, originally pursuing a conventional career as a classical composer, Coker’s path into game composing came from writing music for stray game mods, which soon lead to an email requesting him to send a few music demos for a game still in production, with no pay upfront but a possibility to stay on as the production’s music composer. Little did he know, that email came from the future director of Ori and the Blind Forest.

Gareth Coker is indeed a self-described gamer, which may have influenced his interest in composing music intended as accompaniment for alternate media.

‘The life of a composer is a non-stop education, there is always something new to strive for, a new technique, a new production skill, and then of course the natural progression in one’s music from writing (and finishing) more music.’ – Gareth Coker – Bandcamp Daily Interview

Coker has repeatedly referred back to one specific anecdote from his youth during his various talks and text-based interviews regarding his on-a-whim enrolment into the highly prestige music academy, and for good reason. From his recounts, the application process for the academy required an extensive portfolio of compositional work, ideally with a diverse combination of solo, small and large chamber and orchestral ensemble, and electronic pieces to showcase one’s breadth of experience. Armed with just skills with a piano, a single strings quartet and a handful of electronic pieces, Coker’s seemingly hopeless application was accepted due to a single reason: “Everything else I lacked, I could always learn on the job. But the ability to write tunes, to feel melody? That is the most important skill and the hardest to teach. And I have shown my professor then that I indeed can write melodies.”

“And the rest was history”: The Fundamental Purpose of Music in Games 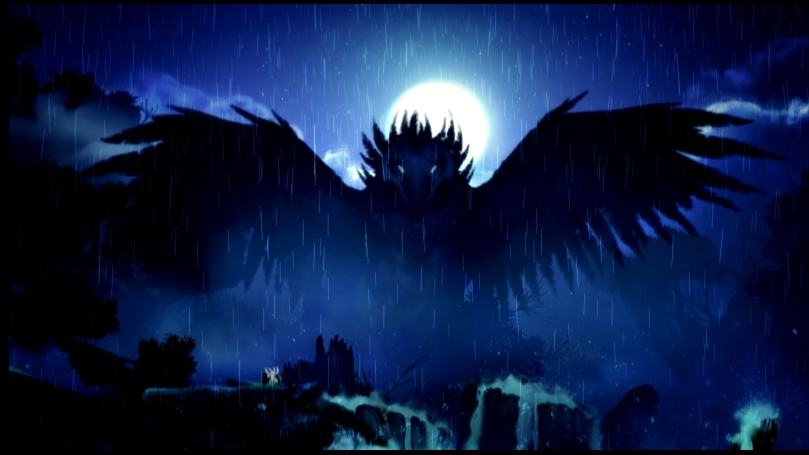 To truly discuss in length about the music of Ori and the Blind Forest in detail, would be the subject of a future post, and the job of a writer (doesn’t have to be me) who’s armed with way more technical know how than me at this moment. However, there are some details from the original soundtrack that I would like to point out, namely, the piano-led main melody line and the vocals by Aeralie Brighton, so I can complete the discussion about the trailer.

Immediate recognition of the piano’s melody is obtained by the notes’ immediate echoing of the previous game’s soundtrack, and the melody melds the tickling reluctance of the piano with a gentle underlying bed of dissonant strings to seamlessly paint a picture of nature-instilled calmness, further aided by the mixed-in sound design of rustling leaves and animal calls. In this soundscape, the piano initiates command over the audience’s sonic attention, and it is one that is immediately nostalgic for those who have already experienced the world of Nibel, but also doesn’t lose the newcomers, due to its subtly meditative and entrancing disposition. The trailer’s beginning seconds marks the pastel environment of the game world, before it proceeds to tear it apart, as everything from lightning strikes, thunder claps to intense effects and creature animation took over the golden sun-lit forestry to reveal spider-infested caves, fire-ravaged fields and graveyards. The music’s crescendos battled with the sound effects as it swells unchecked with bass-thumping electronics, soaring violins, before finally completing the story cycle as the piano returns to the forefront with the same beginning melody, this time interwoven with an almost sobbing lone vocal performance.

Excellent choices in sound design is again showcased by the barely-there echoes of a distant cry of terror, before the sheer tragedy of the scene was brought home by a single clear-as-a-bell whimper from a foregrounded young character (left to interpretation whether it was the baby owl who was implied to have lost their family, or the main character Ori). The scene was a also master stroke in visual direction: the reveal of the mass graveyard after the bright yellow eyes of the baby owl has given the audience’s eyes a reference point, so they can follow the reveal along with it, the appearance of Ori and her embracing the owl in an attempt to comfort them, as the camera dispassionately distanced the audience from them, before panning up to reveal the titles. All this, accompanied by Brighton’s haunting vocals and Coker’s composition, is masterfully demonstrative of the affect of music to picture.

It is paramount to note here, that Coker’s choice of Brighton for the main vocal elements of the original game’s soundtrack was (in his words, paraphrased) made with his desire to find a voice that is ‘hungry, hauntingly beautiful in its desperation’. While her work can hardly be judged by the little of which was showcased in the trailer, I daresay this decision’s motivator should at least entice you to explore further on your own.

Of course, as mentioned by Coker himself, composing for games is a COMPLETELY different beast than scoring films, even if the two mediums do share some superficial ties in how they may transmit meaning. My brief account of how a games trailer aims for a cathartic, emotional response from its audience showcased how no matter the medium of accompaniment, music and melody carries with it a certain nameless aura that can transmit unspoken meaning, affect through seamless weaving of tempo, instrumentation and volume.

My coverage of film and game music will continue in good faith that it is appreciated by the community, so I hope you will continue to follow my write ups. If you liked this output, please consider supporting me on Patreon!