Sounds that give you a sense of weight

“The core message I had for the cast was that they should put themselves into the position of real figure skaters.”

Could you tell us about when you first met Director Sayo Yamamoto?

Shimizu: The first time I worked with the director was on her previous work, LUPIN the Third: The Woman Called Fujiko Mine. That was when we met for the first time. I’m glad that I’ve been asked to work with her again, but I was surprised to learn that this work would be about figure skating.

Shimizu: I don’t remember us ever having a conversation about it. That’s why I thought it pretty amazing that they chose me out of the many sound directors working in the industry. Well, I do think that, just this time, I’m quite suitable for the job (chuckles). Or rather, that I think in this way indicates just how much I’ve loved figure skating, for as long as I can remember. I’m actually from Nagoya myself, and in my neighbourhood, there was a skating rink that produced many elite skaters, one after another. When I was in junior high school, there were rumours that a girl attending the school next to mine was a fantastic skater, who turned out to be Midori Itō, and so on and so forth. That’s how close the world of figure skating was to me, so it was kind of natural that I came to like and follow it all these many years. As such, I really am incredibly happy to be involved in this work.

As the sound director, is that anything that you’ve paid particular attention to?

Shimizu: Well, an important part of my work is to direct the cast through their performances. This time, I started by having them put themselves into the position of real figure skaters. There’s a genre of anime that we call sports fantasy, but in this case, we were aiming to make the competitions as realistic as possible. Hence, I thoughts that, whatever emotions they express, we should generally start from what the competitive sport of figure skating involves. The protagonist might have a lot to worry about, but if we express his worries by substituting them for problems that anyone would have—like not being good at studies or not being popular, then that would remove the point of him being an ice skater. Hence, I wanted the cast to get as close as they could to the mentality of real figure skaters.

But one of the charms of this series is that, whilst it’s serious about depicting what it means to be an athlete, there’s a fair amount of light comedy weaved into it.

Shimizu: If we’re to maintain the tempo of the manga-style storyboards that Mitsurou Kubo-san has drawn, keeping it to the right episode length whilst going back and forth between the serious and comedic parts, then this also has to be achieved through the performances of the cast. In particular, we’ve been working (Toshiyuki) Toyonaga-kun pretty hard. His character’s mood flips between high and low spirits a lot throughout the series. Just how far can we take it without it coming across as unnatural for one person to flip back and forth like that? That’s our major challenge. Other than that, I’d alike to completely capture the moment(s) where a fire is lit in Yuri Katsuki’s heart. 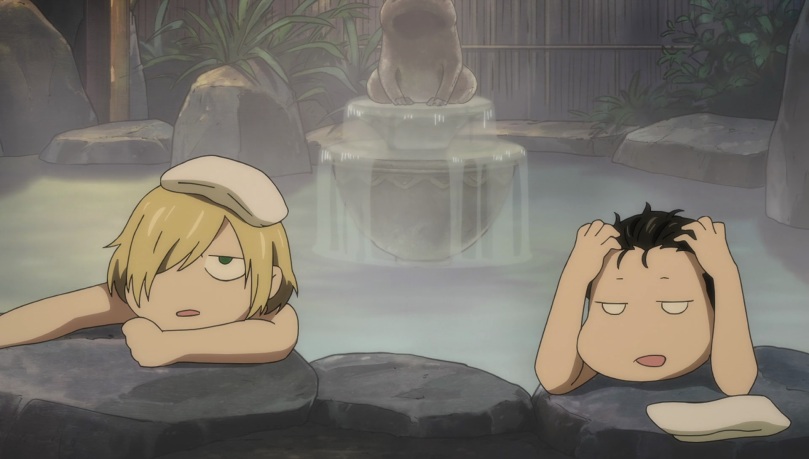 Are there any moments at the recording studio that have left an impression on you?

Shimizu: For episode 1, we had Takeshi Honda, a former figure skater who now works as a commentator, amongst other things, come in to do the competition commentary. When I saw the way that he maintained his nerves of steel, it struck me just how amazing competitive sportsmen are. Normally, amateurs and even performers are somewhat nervous when they come into a studio. But I didn’t sense any of that nervousness from Honda-san—he was able to speak as he usually does. Using your normal voice in front of the mic is actually quite difficult. So when I sensed within him the grit of someone who has fought with his own body on the line, I really felt a shiver down my spine.

And how did you handle the music?

Shimizu: This time, I’ve left a lot of things to (music producer) Keisuke Tomonaga-san, including the ‘music orders’ for the composer. But one really interesting thing is that the music for many of the competitors’ short and free programs are original creations. Furthermore, during the performances, we can’t put any other music on in the background, so it’s incredibly difficult to use them properly. For example, we can’t do things like ‘Let’s use this song for battle scenes!’ From here on, the number of skaters is going to increase, so I’d like to take great care in putting it all together as we move forward.

(Translator’s note: Music orders refers to a ‘menu’ of songs requested from the composer, usually with titles like ‘battle music’ or ‘everyday 1, 2, 3’ etc.)

What were your thoughts on seeing the completed footage?

Shimizu: Like, I thought it was just fantastic. Above all, I could feel the weight of the skaters. You might think that the way people move in figure skating is amongst the most complex amongst all possible human movement, but their weight and inertia all came through very clearly. Figure skating is a sport in which you try to free yourself from the pull of gravity. Therefore, if that weight is clearly depicted, then you can tell what it is that the skaters fought against and lost to. That said, trying to do that for a weekly TV series is a pretty savage challenge, really (chuckles).

Newtype published two interviews for its feature, one for the sound director and another for the sound editor. Link to part II here.

Biggest thanks to karice from HOT CHOCOLATE IN A BOWL for the translation and the initiative to flood the web with such intensive coverage for the series. The ONLY reason this entry was formatted by me & ended up on this blog was because I supplied the transcripts and scans, so 99.99% of the credit pretty much goes to her.