Ok, before I go on, allow me to reinstate (all) my comments from the season previews:

You know…The Japanese really must hate physics: they just have to flick the middle finger (or whatever insulting gesture they have over there) at every proven physics law and say: “f*ck that noise, this law of physics doesn’t work with my story, let’s screw with it.” Don’t get me wrong, we do it too. The fact that light speed travel would require an infinite output of kinetic energy and equating us being of infinite mass (a little too late for a diet, I suppose…) didn’t stop both ‘Star…’ franchises from using them. The funny thing for me is…the Japanese LOVE to invent mock physics laws and concepts to justify their physics-defying plot points. Think: the fifth dimension and subatomic materials explained by means of: “ummm…scientists discovered it in 2140: they found out that a square DOESN’T have 4 sides…it actually has 4 sides and 17 anti-sides…anti-sides that hides the meaning of life.”

Apparently, an infinite energy source exists within a recently discovered (the year’s 2071, by the way) alternate dimensional plane, named the W dimension, which exists beyond the X, Y and Z dimensions. So…If I were to calculate the volume of a rectangular prism, now I have to find out the dimensions of its length, width, height and…

Yep, that’s basically it. Now that I’ve reached the show’s conclusion, Dimension W’s potential lies within its wealth of ideas that occasionally showed sparkles of inspiration, but it ultimately self-destructed in a heap of loud mess. Tying it all up with an ultimately unlikable protagonist and a cute robot girl that has little substance beyond her admittedly appealing design, Dimension W is an unfortunate stumble of a series. 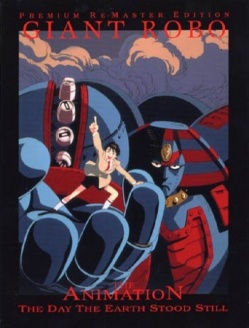 A throwback series, Giant Robo’s intense aesthetic and a stark exploration of genre homages gives it a distinctive charm that defies obscurity.

Similarly toned urban fantasy-esque universe with a tinge of Sci-fi and otherworldly concepts.